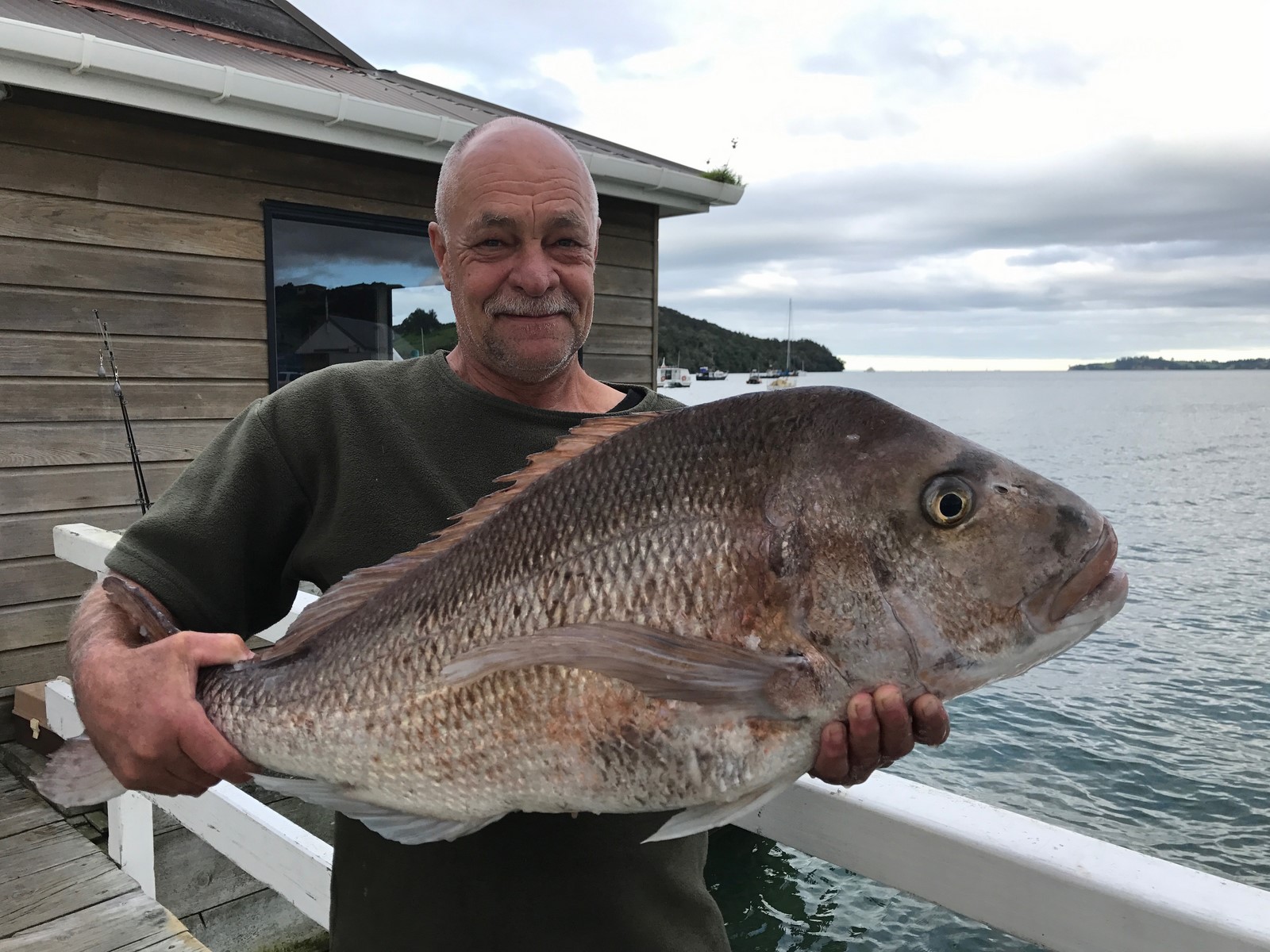 A solid turn out of anglers and some great catches were in contrast to the untidy weather on Friday and Saturday. Easterlies of 30+ knots and torrential rain were largely forgotten by Sunday when the sea dropped off and the sun came out. Good ol’ NZ, it’s so much fun living on a skinny motu between two large ocean systems.

106 anglers and some hardy juniors braved the elements, many making the sensible call to fish around Kawau. But as almost always the bigger fish came from further afield, a good consolation for getting a thumping on the way to Great Barrier.
64 Earlybird tickets were sold. The forecast even a week out was nasty, so thank you to those anglers for your commitment. The Earlybird prize was our traditional chillybin with $200 in gold coins, rum, and other H&F good stuff and won by Jason Kelly. A reasonable forecast the week before is worth about 30—40% more anglers to us.

This years average was 2.223kg, which is on the low side as far as our averages go. Over the last 10 years the average calculates at 2.611kg. Any snapper between 2 and 3kg is arguably the ideal pannie and these winter fish are in very good condition. Filleting them makes the knife greasy with the fat they put on for winter. The 2017 average prize was a Makita 18V drill kit from Matakana ITM (thanks James) which came in a big K2 cooler filled with other goodies from Hunting & Fishing Warkworth (thanks Larry & Anne), and was won by regular 10kg punter Buck Rogers on Estasi.

You know from fishing previous 10kg’s you need at least a 5kg snapper to get into the top 10, so it was good to hear of many anglers releasing snappers between 3 and 5kg because the bin level was already looking good. This years range was 5.777 to 10.826kg.

The kahawai and kingfish sections featured modest fish, but the trevally pushed well into the horse category at over 6kg!
We always ensure that the maximum possible return to anglers is achieved. The prizepool this year was the most generous in the last decade. Matakana Marine and Mercury threw $4k cash at us—that’s a spectacular level of support for a local event! Larry and Anne at Hunting & Fishing Warkworth made sure that this cash and ticket income went a very long way on shopping day.
After all that hardship on the water it’s good to know that there’s some fresh snapper encased in deep fried golden goodness thanks to Andrew at FogDog and a build-your-own-burger on Sunday night. If you’re looking for a non-beer batter the Tasty Tempura is just mixed with cold water—it doesn’t get any easier or more reliable than that. The SYC bar got a good shake by the throat. Yes, we know we ran out of rum again but it’s a great venue and we’ll boost supplies for next year. Thank you to our kitchen and bar support people, sponsored by Matakana Contractors. And thanks to anglers donating fish for the meal, it doesn’t get any fresher than that.

JUNIORS: The juniors caught great fish too, with Korbyn Barratt’s 7.08kg snapper taking top honours. Daniel McFarlane was second with a 1.9kg kahawai and Keidis Watts 3rd with a 1.64kg snapper. Aaron Stenbeck took himself and 2 juniors to Gt Barrier, and all of them were still on the boat when he got home—we should have a prize just for that!

The KAHAWAI weights weren’t busting into the 3’s like they have some years, and were about the same as last year:
1st Eli Marshall 2.436kg
2nd Barry Plumpton 2.419kg
3rd Alby Petersen 2.406kg

The KINGFISH section was down in size and numbers from last year:
1st Bradley Bowmar 8.813kg
2nd Steve Taylor 8.066kg

The ‘Hard Luck’ prize had some strong contenders. Steve Parkes is a valued supporter of the Club and our events and didn’t de-serve to lose his very nice anchor and stainless steel chain when he went to anchor up after a year of only gamefishing. The chain hadn’t rusted but the warp had definitely rotted. Thanks for sponsoring the kitchen staff Steve. Hopefully a GPS co ordinate and a diver can sort that problem out. The crew on the freshly launched Fraser vessel fared even worse—engine noises saw the hatch being raised. Rough seas saw the hatch come down—across the skipper head. And then the en-gine found some seawater to drink with the diesel, and a lengthy tow ensued (thanks Mojo crew). That took first place.
But spare a thought for probably the most unlucky lad that didn’t even wet a line. Wayne Brown (Brownie) has been fishing the 10kg since its inception 20 years ago. You might have seen him at previous events, wearing a green sweatshirt with each year embroidered onto it. 2017 won’t be on it because he came off a ladder a month before the event and has a long road to recovery ahead of him. 2018 should get to be embroidered onto the shirt though and we’re looking forward to having him back.
The LADIES section was won by Atenata Brown with a
page 3 of 6
Eli Marshall with some his prize haul
Bradley Bowmar, another young fella doing well and future 10kg skipper
Atenata Brown with another great prize combo from Ww H&F. Hubby Ross Brown was one of the 2 winners of complimentary tickets to the 2018 10kg tournament, he’d be mad not to take her out again.

Kevin Barratt and his team fished Great Barrier, and even had a stint landbased while they were there. But the big fish came from a session not far from where waves the size of houses were rolling through a gap. Second placed snapper and the two big trevs were welcomed aboard X-cellerate in some trying conditions at the other end of Great Barrier. X-cellerate is the new boat for the Plumptons, with X-calibre being their old one. So yes the big fish gen-erally came from out wide, but when you take into account the fuel burn, travel time, and nasty sea at the beginning of the weekend there’s a lot to be said for fishing closer to home.
Thank you to anglers donating fish for the meal and few extra for the LegaSea team, sharing the fish love is rewarding on many levels. The heads and frames from the filleting effort (Thanks Cam, Grant, Lou, and Pieter) were gratefully received and skilfully turned into an Island funeral feast in West Auckland. Maximum respect for the resource means using every possible part of it on an event level like this and personally. Check out www.freefishheads.co.nz
Is there any appetite out there for the 10kg to become a measure only comp? From a quick infor-mal survey the answer is ‘no’. Everyone seems to fully utilise their catch, limits their catch where nec-essary, and appreciates having two days in which to gather some fresh fish at a time of the year when they’re typically not fishing much. The 10kg effort is spread far and wide and is relatively low level com-pared to some events. But we’re always open to ideas, so if anyone has a suggestion or comment please get in touch.

Once again Tom and Dan drove way up north to fish landbased. They usually come back with a top 10 snapper but not this year. The 10kg has previously been won by a landbased caught fish, but not for a while. It’s hard enough stopping the big fish from a boat in close, let alone from standing on the bricks.
The 10kg Trophy has been around since 1997 and is worked out on a formula—any of the 4 catch species can win it. This year the 10.826kg snapper caught by Kevin Barratt wins the 10kg trophy, by a whisker over Steve Hatch’s 6.211kg trevally.
Thanks to our weigh station team of Sophie, Monique, Louise, and Berry.
Louise O’Sullivan worked her magic collating results (and all the other amazing behind-the-scenes work she does). Tom and Cam expertly sorted the prize categories.
Thanks to our ticket outlets of Warkworth Hunting & Fishing, Snells Beach Fish & Dive, Matakana Marine, and Top Catch Whangaparaoa. And thanks to the WGFC committee for putting this event together with hard work, good judgement, and always a bit of humour.
Warkworth Gamefish Club apparel makes an excellent and cost effective gift for the typically hard-to-buy-for person. Items include T’s, long sleeve T’s, polo’s, super warm hoodies, fitted ladies T’s and more, all with the sharp graphics you saw on Sunday night. Give Tom a call on 021 575 954 to catch up about sizes etc. Clothing will also be available at our Club AGM and Annual Prizegiving in August.
The 2 winners of the draw for a complimentary ticket to the 10kg in 2018 were Ross Brown and Keith McGillivray.

Next years 10kg is on Saturday 2nd /Sunday 3rd June 2018. Put the dates on the calendar now. The forecast is for 5knots northeasterly, both days.